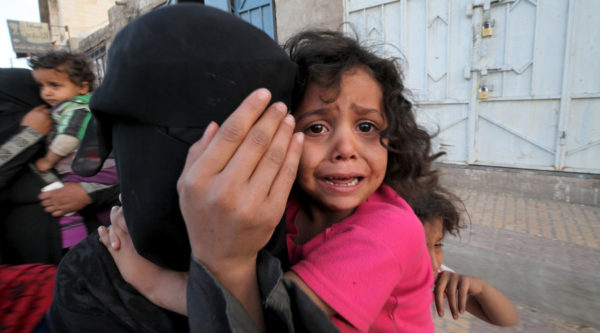 Those killed were attending a funeral of one of the prominent personalities in the country. The jets targeted the funeral hall. The aftermath of the bombing was disturbing. A Yemeni official in the current unity government of the country said the funeral hall was turned into a “lake of blood” after the bombs was dropped by the Saudis. He also revealed the strike left more than 534 people wounded. Human rights groups monitoring the situation have also finally added their voice to the growing dissent against the Saudi-led coalition in Yemen. According to the rights groups, many Yemenis are dying of perpetual hunger, lack of medical supplies, as well as being at risk of chemical and heavy weapons attack. All of these threats are brought upon the people, directly as a result of Saudi Arabian aggression.

When the Saudis began their air campaign in Yemen, they also established a blockade on the ports of Yemen. Already, Yemen is a poor country in the Middle East, and largely depends on imports to feed its population. Therefore, the blockade means basic food and medical supplies will no longer reach the country’s population, severely devastating innocent civilians. The United Nations has said more than half of Yemen’s 28 million citizens are suffering from a lack of food, with vulnerable children ending up the hardest hit; up to 400,000 children are suffering from severe malnutrition, leading to a number of diseases in the country.

Apart from the blockade, civilians are facing constant bombardments from the Saudis. A recent investigation conducted by the Guardian revealed that more than a third of all airstrikes by the Saudis hit civilian sites, including hospitals, schools and mosques.

To further complicate the situation, Saudi Arabia has blocked a United Nations request for an independent investigation into the crimes it is committing with the bombing campaign in the country. “We are seeing a humanitarian catastrophe on an unprecedented level. It may well amount to genocide if we don’t act quickly and do something about it,” Kim Sharif, director of Human Rights for Yemen described the situation to RT English News, in an interview.

She also said both the United Nations and its children’s agency, UNICEF, have reported the situation in Yemen, but “unfortunately it is all about talking and making reports and chit-chatting.”

“People are dying of chemical type of weapons, where children are developing very unusual cancers that are usually connected with a nuclear type holocaust. This is very shocking and so frequent in the northern parts of the Yemen that there is a disproportionate development of rare types of cancers that are usually connected with nuclear types of disasters,” she said.

Sharif also insisted that an independent investigation into the situation in Yemen and the war crimes being committed by the Saudi Arabia, is very necessary.

The war in Yemen is often referred to as the forgotten war, due to the lack of attention received by the media. Mainly, the war is a proxy between the Kingdom of Saudi Arabia and the Islamic Republic of Iran. In 2014, rebel groups from the Houthi movement allied with troops loyal to the former president of the country, Ali Abdullah Saleh, captured the majority of the country, including the capital Sana’a. The Houthis belong to the Shia faction of Islam, and therefore have support from Iran – a major Shia country in the Middle East.

The current president, who the Houthis want to oust, Abd Rabbuh Mansur Hadi, is a Sunni. He has the backing of Saudi Arabia – a major Sunni country in the region. In March 2015, Saudi Arabia convinced other Sunni countries in the region to form a coalition aimed at dropping bombs against the Houthis. The airstrikes exacerbated the already fragile situation. The Houthis, too, have received arms supply and fighters from Iran. The United States is on the side of the Saudis, and has provided technical assistance to the coalition, to bomb the Houthis.

This article (US-Backed Saudi Arabia is Committing Genocide in Yemen; Cancer Connected with Nuclear Disasters Develops in Children) is a free and open source. You have permission to republish this article under a Creative Commons license with attribution to the author and AnonHQ.com