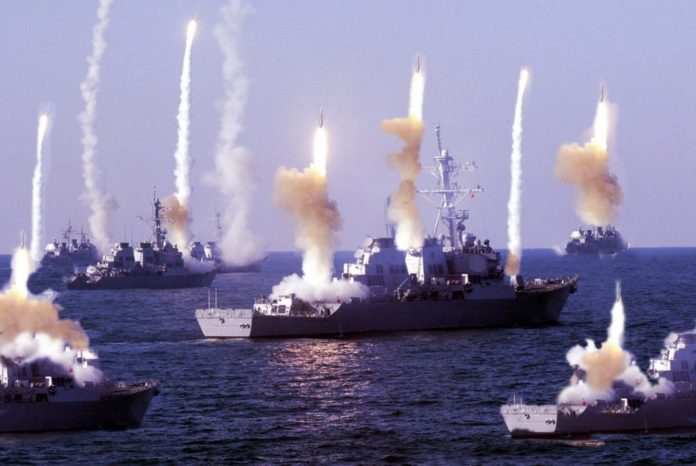 A US military strike group, the Carl Vinson, is enroute to the Korean peninsula following discussions between the Trump administration and South Korean officials after the Syria strike on Thursday. North Korean leader Kim Jong-un called the US strikes an “intolerable act of aggression,” that support his reasoning to continue with the North Korean nuclear programme.

A diversion of US warships from port visits to Australia is being headed by the Carl Vinson, and was re-routed from Singapore.

“The president has asked to be prepared to give him a full range of options to remove that threat to the American people and to our allies and partners in the region,” General HR McMaster, the US Security Advisor said of the move.

Private sources from the United States have also confirmed the movement of troops out of Alaska. It is uncertain at this stage if it is routine training or official deployment, however “nobody right now is really talking,” they said.

Trump earlier had called on Russia to contain Syria and do more to curb the Assad regime. On the same day of the US Syria strike, Trump met for a 2-day summit with Chinese President Xi Jinping, expected to ask the same of China to “do more” to contain North Korea.

KCNA news agency quoted a North Korean foreign ministry as calling the US a bully in light of the Syria strikes. “Swaggering as a superpower, the US has been picking only on countries without nuclear weapons and the Trump administration is no exception,” the KCNA news agency reported.

“The US missile attack against Syria is a clear and intolerable act of aggression against a sovereign state and we strongly condemn it,” KCNA quoted the spokesman as saying. “We will keep bolstering our self-defensive military might in various ways in order to cope with the ever-intensifying US acts of aggression.”

The Chinese and the Russians, over the last 12 months have voiced concern over increased tensions on the Korean Peninsula, asking for the US to cease the installation of the anti-missile THAAD system in South Korea’s North Gyeongsang Province.

However, Trump has made it clear that the US will also act unilaterally with North Korea if Beijing fails to help curb Kim Jong-un’s nuclear weapons programme, and that the THAAD installation will continue.

Rex Tillerson, the US Secretary of State only warned last month that military action against North Korea is very much on the table if the nuclear programme continues. The Trump administration demonstrated with the Syria strike their willingness to go it alone with or without UN and Congressional approval, albeit using Trump’s authority as commander in chief of the armed forces.

“If China is not going to solve North Korea, we will,” Trump said in an interview. Since the Syria strikes, a military presence has also built up in the Mediterranean. A reported British nuclear submarine has been deployed to patrol the Mediterranean and NATO forces are on high alert. The USS Porter and USS Ross – which released the Tomahawk missiles under the cover of darkness – remain in the region. Cyprus also hosts a British RAF base, home to 16 fighter aircraft and surveillance planes. The RAF Akrotiri is used to mount operations in the Middle East.

Moscow has also called off all communications with US forces, risking collision over Syria; they too have deployed the missile warship Admiral Grigorovich to the Mediterranean Sea to stand guard over the Tartus Port, where the USS Porter and Ross launched the strike from. Increased Russian submarine movement is occurring in the Black Sea.

The Russian build up may be in response to the NATO build-up of its forces along the Baltic states, particularly in Poland and Romania, with as many as 40,000 troops now stationed in the area, and with more recruiting ongoing. As growing tensions continue to mount, the lack of reports on the outcome of the 2-day summit between the US and Chinese presidents –  with Chinese media being particularly cautious – raises questions on the next military move. Although Chinese officials have on several occasions called for calm between the US-South Korea alliance and North Korea, Chinese historian Zhang Lifan predicts the lack of Chinese media coverage is to protect President Xi Jinping from embarrassment if Trump decides to get tough on the North Korean issue.

This article (Poised to Strike: Moving the Military Chess Pieces into Place) is a free and open source. You have permission to republish this article under a Creative Commons license with attribution to the author AnonWatcher and AnonHQ.com.