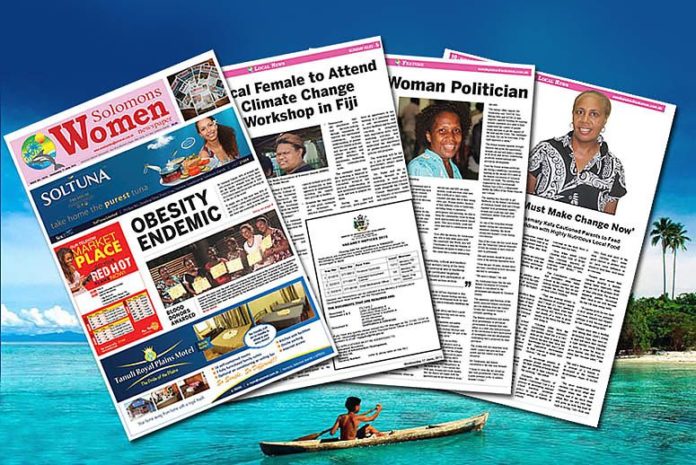 Nearly 2 in 3 women between the age of 15 and 49 have experienced violence in Solomon Islands, a Pacific Island country situated north-east of Australia. 73% of men and an equal percentage of women believe violence against women is sometimes justifiable, especially for infidelity and disobedience. There are multiple reasons behind gender-based violence, but it primarily stems from gender inequality and its manifestations.

While United Nations’ human rights experts stress that Solomon Islands must do more to protect women from violence and provide victims of gender inequality access to justice, a new weekly publication devoted to women’s issues — Solomons Women Newspaper — is making sure that women are given voice and their contribution to social, economic, and religious development gets the attention it deserves. Staffed by both men and women and published every Wednesday in print and digital versions, the paper covers a wide variety of issues, including stress among working mothers, prostitution, and life as a single parent. It also features sports, entertainment, health news, and advice on a number of topics, from how to deal with divorce to a female nutritionist discussing healthy school lunches for kids. Lifestyle columns offer recipes, fitness suggestions, and beauty tips.

Founder and publisher Lynda Wate Seni hopes that the paper is intended for women, as well as men, because feminism isn’t just for women, and because only better informed men can support gender equality.

“Hopefully, somewhere down the road, [the paper] will help change our men’s mindset to work side by side with our women on issues that matter to our local women… As an infant paper, there is still more room to improve our news coverage and get more voices from the village levels to the desks of many men and women every week” Currently, seven women and five men produce and oversee content for the paper. Romulus Huta, chief of staff and one of the male writers, says: “In a male-dominated society like the Solomon Islands, only a few reporters have shown interest to report on women’s issues. I seem to enjoy every bit of it when reporting women’s issues. I have also learned a lot.”

Senior news reporter Mike Tua adds: “The paper has received overwhelmingly positive support [from both genders]. People have seen the paper as an avenue to break the code of silence surrounding the variety of women’s issues in the country.”

In 2008, the Solomon Islands government proposed to introduce 10 reserved seats for women, which failed to get the Cabinet’s approval.

In 2009, a national policy on eliminating violence against women (VAW) was launched to address the inequalities that cause and perpetuate VAW, strengthen VAW prevention efforts, address the triggers of VAW, and improve awareness of women’s right and the equality of all citizens. Despite much hullabaloo, gender equality was not achieved.

Following the 2010 national elections, the newly-elected government vowed to look at options for women’s reserved seats as part of a broader electoral boundaries review; nothing changed, though. In 2011, the World Health Organization reported that despite continued efforts by Solomon NGOs and faith-based organizations, “until recently political leaders trivialized and denied the existence of violence against women…the region has been very slow in developing relevant legislation, policies, programs and budgets to address the issue.” Since Independence, only three women MPs have ever been elected to the 50-member Solomon Islands Parliament.

Even though many Solomon Islanders believe that women are not born to be leaders but to get married and stay at home, Solomons Women Newspaper can definitely help transform such premature perceptions, as well as bring out genuine changes in the lives of ordinary Solomon women.

What are your thoughts? Please share your views in the comments section below…

This article (How A Weekly Newspaper is Empowering Women in Solomon Islands) is a free and open source. You have permission to republish this article under a Creative Commons license with attribution to the author and AnonHQ.com.