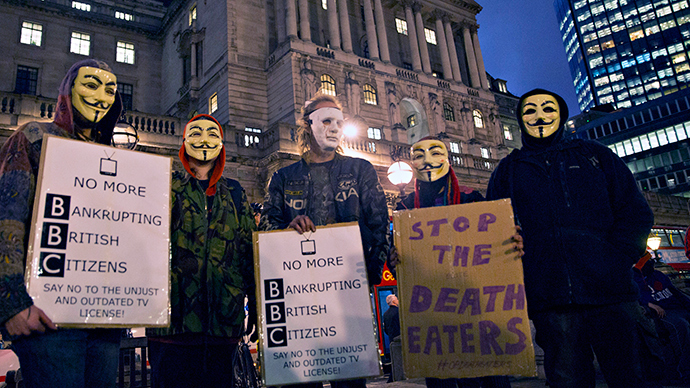 The BBC recently released a video that seemed to FINALLY show them “admitting” that one of the MAJOR catalysts for the Ukrainian revolution were in fact fascists. This admission comes with a caveat; the reporter states that ” it’s not easy to judge exactly how strong they are in numbers, or exactly what the extent their far right ideology is”…. In typical BBC fashion, they have been forced by the increasing public awareness of the “extent” of the Neo Nazi ideology, to admit that Poroshenko is merely a sweet face on an otherwise sternly Hile Hitlering movement- a puppet who depended on Western support for financial support, and on Neo Nazis for the real muscle power.

Even then, the BBC continues to pretend that it is oh-so difficult for them to decide how many Nazis there are, so that it all looks like they weren’t being purposefully biased in their reporting if the Nazis do indeed seize power. They, of course, had willfully ignored the all footage of Neo Nazi behavior going on in Ukraine, that was quite easily available to them in the time leading up to the revolution.

Still don’t believe that the Neo Nazis are a dominant force in Ukraine? Why not check out a video where a Ukrainian court ruled that the Odessa Massacre was accidental, and I attempt to disprove that assertion. Others have compiled far more comprehensive videos on the situation.

Or how about a few other videos showing the sort of Neo Nazi chanting that goes on at their rallies? Come ON BBC. You finally admit there are fascists, but claim that they are relatively weak, that they do not influence the government’s decisions, such as that fateful one to deploy the military to crush East Ukrainian protests in the lead-up to the civil war…. There’s more evidence of fascism than your assertions of direct Russian military assistance in the East (social media evidence? Really??)… I would point out that the Ukrainian army has not attacked the ONE place where there are confirmed Russian troops on its borders…. Crimea. The only place Russia cares about is that one strategically located only-warm-water-naval-base-in-the-world. And only there is there no Ukrainian bombing missions.

The Ukraine Crisis, Propaganda, and ‘Groupthink’

Germany Angry At NATO For Lying & Propaganda In Ukraine Crisis