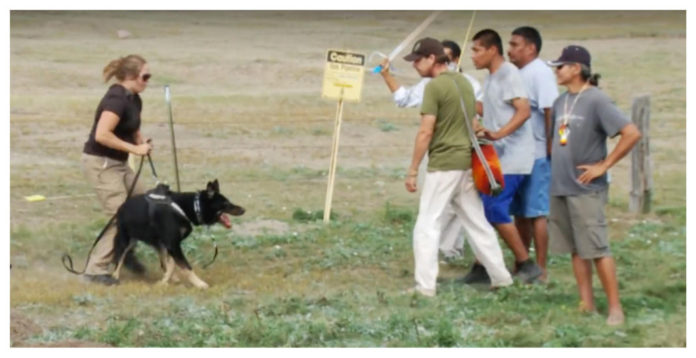 An investigation conducted by the Morton County Sheriff’s Department has concluded that the Frost Kennel dog-handlers hired by the DAPL, were not properly licensed to handle security in the State of North Dakota, nor are they a registered security company in the State of Ohio. On Sept. 3, Democracy Now journalist, Amy Goodman, and film crew captured Frost Kennel workers attacking land protectors with guard dogs, sparking a national outcry.

According to North Dakota’s Grand Forks Herald, Frost Kennels, who was working under a private security company called Silverton, refused to cooperate with investigators, and as a result, they were supposedly only able to identify the Frost Kennel workers exposed in social media. This includes Ashley Nicole Welch, who was the main aggressor.

Part of the reason some of the individuals can’t be identified, according to Capt. Jay Gruebele of the Morton County Sheriff’s Department, is that many of them have “come and gone,” and with Frost Kennel’s lack of cooperation (which you’d think would be a crime in itself), there’s no way to prove who was doing security work. It is ironic that with the technology that law enforcement has access to these days – such as the facial recognition technology they’ve been using to misidentify Native land protectors, or the database that includes 117 million American drivers’ license photos – they just can’t seem to identify the individuals whose faces are plastered all over Democracy Now’s reports, and the Internet. Of course, it’s too late for those who were identified by the online community.

Those with Grand Forks Herald say that fortunately, Forum News Service did identify an additional three individuals who were present on Sept. 3, and that they did not have proper licensing to work security in North Dakota. All individuals who have been identified may face fines and jail time.

As a relevant side-note: the charges that were brought against Democracy Now’s Amy Goodman, were apparently based on a statement made by Ashley Nichole Welch  in an affidavit that claimed Goodman was actively protesting, and “trying to get the protesters riled.” As reported last week, the charges against Goodman were dropped.

Investigators claim that as of now, there are no “victims” from the September attacks, since none of those who were attacked have yet to come forward; but with the lack of trust land protectors have for law officials due to being attacked and wrongly arrested, it’s no wonder individuals have not stepped forward.

The Bureau of Criminal Investigation is doing their own probe into the incident, which includes looking into the claims that the Frost Kennel workers were the ones who were assaulted. In addition, the Private Investigation and Security Board is conducting an investigation as well, with a focus on the use of guard dogs.

Policy director of the American Civil Liberties Union of North Dakota, Jennifer Cook, hopes to see the current investigations come to a fair resolution. She summed the situation up well in her statement:

“It seems as though the process for charging journalists and protesters with criminal charges has been relatively speedy and timely, whereas you have actual video footage of private individuals using force against other private individuals and yet we haven’t seen any type of resolution to that yet.”

This article (DAPL Guards Who Attacked Natives with Dogs Were Not Licensed to Work Security) is a free and open source. You have permission to republish this article under a Creative Commons license with attribution to the author and AnonHQ.com.