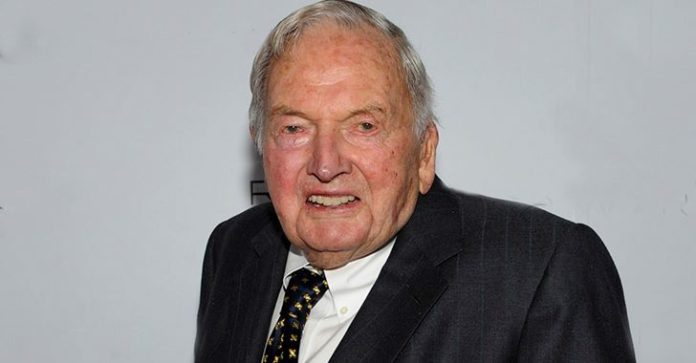 David Rockefeller, the famous banker and philanthropist with the family name that controlled Chase Manhattan bank for more than a decade and wielded vast influence around the world in the world of finance, has died on Monday morning at his home in Pocantico Hills, N.Y. He was 101.

Below is an excerpt of his obituary from the NYT:

Chase Manhattan had long been known as the Rockefeller bank, though the family never owned more than 5 percent of its shares. But Mr. Rockefeller was more than a steward. As chairman and chief executive throughout the 1970s, he made it “David’s bank,” as many called it, expanding its operations internationally.

His stature was greater than any corporate title might convey, however. His influence was felt in Washington and foreign capitals, in the corridors of New York City government, art museums, great universities and public schools.

Mr. Rockefeller could well be the last of an increasingly less visible family to have cut so imposing a figure on the world stage. As a peripatetic advocate of the economic interests of the United States and of his own bank, he was a force in global financial affairs and in his country’s foreign policy. He was received in foreign capitals with the honors accorded a chief of state.

He was the last surviving grandson of John D. Rockefeller, the tycoon who founded the Standard Oil Company in the 19th century and built a fortune that made him America’s first billionaire and his family one of the richest and most powerful in the nation’s history.

As an heir to that legacy, Mr. Rockefeller lived all his life in baronial splendor and privilege, whether in Manhattan (as a boy he and his brothers would roller-skate along Fifth Avenue trailed by a limousine in case they grew tired) or at his magnificent country estates.

Imbued with the understated manners of the East Coast elite, he loomed large in the upper reaches of a New York social world of glittering black-tie galas. His philanthropy was monumental, and so was his art collection, a museumlike repository of some 15,000 pieces, many of them masterpieces, some lining the walls of his offices 56 floors above the streets at Rockefeller Center, to which he repaired, robust and active, well into his 90s.

In silent testimony to his power and reach was his Rolodex, a catalog of some 150,000 names of people he had met as a banker-statesman. It required a room of its own beside his office.

Spread out below that corporate aerie was a city he loved and influenced mightily.

He was instrumental in rallying the private sector to help resolve New York City’s fiscal crisis in the mid-1970s. As chairman of the Museum of Modern Art for many years — his mother had helped found it in 1929 — he led an effort to encourage corporations to buy and display art in their office buildings and to subsidize local museums. And as chairman of the New York City Partnership, a coalition of business executives, he fostered innovation in public schools and the development of thousands of apartments for lower-income and middle-class families.
He was always aware of the mystique surrounding the Rockefeller name.

“I have never found it a hindrance,” he once said with typical reserve. “Obviously, there are times when I’m aware that I’m treated differently. There’s no question that having financial resources, which, thanks to my parents, I learned to use with some restraint and discretion, is a big advantage.”

With his powerful name and his zeal for foreign travel — he was still traveling to Europe into his late 90s — Mr. Rockefeller was a formidable marketing force. In the 1970s his meetings with Anwar el-Sadat of Egypt, Leonid Brezhnev of the Soviet Union and Zhou Enlai of China helped Chase Manhattan become the first American bank with operations in those countries.

“Few people in this country have met as many leaders as I have,” he said.

Some faulted him for spending so much time abroad. He was accused of neglecting his responsibilities at Chase and failing to promote aggressive, visionary managers. Under his leadership Chase fell far behind its rival Citibank, then the nation’s largest bank, in assets and earnings. There were years when Chase had the most troubled loan portfolio among major American banks.

“In my judgment, he will not go down in history as a great banker,” John J. McCloy, a Rockefeller friend and himself a former Chase chairman, told The Associated Press in 1981. “He will go down as a real personality, as a distinguished and loyal member of the community.”

His forays into international politics also drew criticism, notably in 1979, when he and former Secretary of State Henry A. Kissinger persuaded President Jimmy Carter to admit the recently deposed shah of Iran into the United States for cancer treatment. The shah’s arrival in New York enraged revolutionary followers of the Ayatollah Ruhollah Khomeini, provoking them to seize the United States Embassy in Iran and hold American diplomats hostage for more than a year. Mr. Rockefeller was assailed as well for befriending autocratic foreign leaders in an effort to establish and extend his bank’s presence in their countries.

“He spent his life in the club of the ruling class and was loyal to members of the club, no matter what they did,” The New York Times columnist David Brooks wrote in 2002, citing the profitable deals Mr. Rockefeller had cut with “oil-rich dictators,” “Soviet party bosses” and “Chinese perpetrators of the Cultural Revolution.”

Still, presidents as ideologically different as Mr. Carter and Richard M. Nixon offered him the post of Treasury secretary. He turned them both down.

After the death in 1979 of his older brother Nelson A. Rockefeller, the former vice president and four-time governor of New York, David Rockefeller stood almost alone as the remaining family member with an outsize national profile. Only Jay Rockefeller, a great-grandson of John D. Rockefeller, had earned prominence as a governor and United States senator from West Virginia. No one from the family’s younger generations has attained or perhaps aspired to David Rockefeller’s stature….