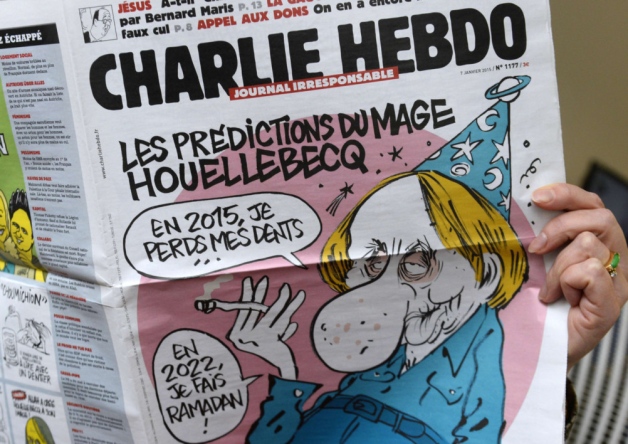 Free speech or hate speech? Who gets to decide? The lawmakers, of course. So while Charlie Hebdo pushed tired stereotypes about France’s vulnerable Muslim minority and defended it as satire, France’s own anti-Semitic comedian Dieudonné was accused of defending terrorism over his Facebook comment that ‘suggested’ he sympathised with one of the terrorists (Amedy Coulibaly) who attacked the satirical magazine’s office on January 7 and brutally massacred 12 people.

This is what Dieudonné posted (since-removed) on his Facebook page on January 12, a day after 3.7 million French citizens marched in unity in an unprecedented tribute to victims of Charlie Hebdo attacks:

“After this historic, no legendary, march … a magic moment equal to the Big Bang which created the Universe … or in a smaller (more local) way comparable to the crowning of the (ancient Gaullish king) Vercingétorix, I am going home. Let me say that this evening, as far as I am concerned, I feel I am Charlie Coulibaly”.

French laws criminalize anti-Semitism and hate speech. Hence, Dieudonné was arrested on January 14 for ‘condoning terrorism’ and released later in the day. He will stand trial and would appear in court on February 4. Dieudonné is already facing an inquiry into whether he condoned terrorism in a video in which he mocked the decapitation of US journalist James Foley by Islamic State militants. If he is found guilty, he could face up to seven years in jail and €5,000 fine.

Dieudonné is infamous for his quenelle hand gesture that looks similar to the Nazi salute. While he insists it is merely a gesture of emancipation, critics believed quenelle is anti-Semitic and got him banned from entering the UK. France’s then-Interior Minister Manuel Valls (now Prime Minister) stated in January 2014: “This gesture is a gesture of hatred, it’s an anti-Semitic gesture and all those who perform it should know—they can’t deny knowledge—that they are performing an anti-Semitic gesture, an inverted Nazi gesture”. A French court in December 2013 found the recidivist bigot Dieudonné guilty of defamation, libel, and incitement to hatred and racial discrimination.

Dieudonné, however, feels that the recent controversy is taking it too far. Here’s the comedian’s plea of goodwill:

“Since the beginning of last year, I have been treated as public enemy number one, when all I try to do is make people laugh, and laugh about death, because death laughs at us all, as Charlie knows now, unfortunately. Even though I offered peace under your authority in the past weeks, I did not get any answer from you yet. Whenever I express myself some people will not even try to understand me, they will not listen. They try to find some kind of pretext to suppress me. I am looked upon as if I were Amedy Coulibaly, when I am no different from Charlie”.

The New Yorker claimed he had “made a career out of walking (and often crossing) a fine line between mocking racial stereotypes and using them” and that he was a “mediocre comedian who has gotten a lot of mileage out of very little talent and a good deal of hate”. But isn’t Charlie Hebdo accused of virulent racism also?

French bans on hate speech have essentially set up double standards. The result is that some people have more of a right to free speech than others. George Washington University professor Jonathan Turley has criticized the country’s enforcement of such laws as arbitrary and inherently political. Turley writes that the “effort to redefine criticism of religion as hate speech or defamation is precisely what (Charlie Hebdo’s editor) Charbonnier fought to resist”. He adds that “the terrible truth is that it takes only a single gunman to kill a journalist, but it takes a nation to kill a right”.

“A democracy does not back down from its fundamental freedoms, from freedom of expression. This astonishing decision sets a dangerous precedent. Who else is going to be banned for having a controversial point of view?” French Human Rights League Agnès Tricoire told France 24 after Dieudonné was convicted for using the word “Shoananas”, a combination of the Hebrew word for Holocaust and the French word for pineapple in December 2013.

French President François Hollande vowed to protect the freedom of expression embodied by the Charlie Hebdo’s satirical magazine shortly after the terrorist attacks. Since then more than 50 people have been detained or jailed for freedom of expression. Shouldn’t this double standard be denounced too, Mr President? Cartoons satirising the Prophet are given support in the name of free speech while people are prosecuted for comments that ‘appear’ to condone terrorism?

Amidst cries of hypocrisy and intolerance, a debate is taking place over the deadly interplay between free speech and religious extremism along with the right to blaspheme. So how do Dieudonné’s recent comments fit in? Isn’t it time for the French government to re-evaluate its own rules and really examine what freedom really means?