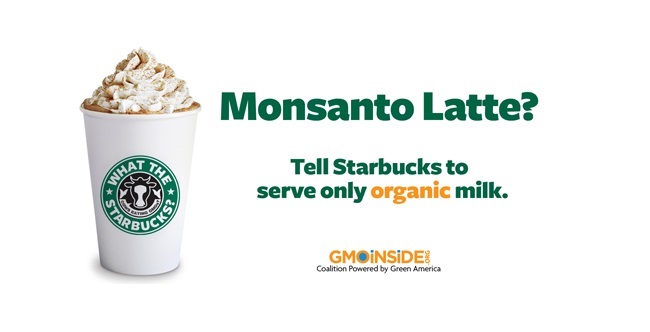 Starbucks has teamed up with Monsanto to sue the State of Vermont to prevent us from discovering what’s in our coffee. The Sum Of Us organization, with the slogan “fighting for people over profits” has posted a petition to help support Vermont in this lawsuit.

The lawsuit, conjured by the Grocery Manufacturers Association (GMA) and who Starbucks is hiding behind, will block a law that requires genetically modified ingredients to be appropriately labelled. According to The Sum of Us’ website, the argument by GMA, Monsanto and its supporters, is that it is “an assault on corporations’ right to free speech.” The intention of the petition is to push Starbucks into withdrawing their support for the lawsuit against the small state of Vermont, and to pressure other companies to follow likewise; taking away some of Monsanto’s power. (Keep in mind that Vermont is the first U.S State to require GMO labelling on all products).

The petition seeks 500,000 signatures. So far, at the time of writing, they are at 312,328. This is your chance to help anonymous and yourselves by signing the petition to stop Monsanto bullying others into overturning vital laws that protect the community, not just in the U.S, but eventually across the world.

Fight against Monsanto. Fight against GMO’s. Fight for your right to know what is in your food and drink supplies. You can sign the petition here. It only costs you a few minutes of your time.

Toxic GMOs: The Truth Senators and Monsanto Tried to Hide