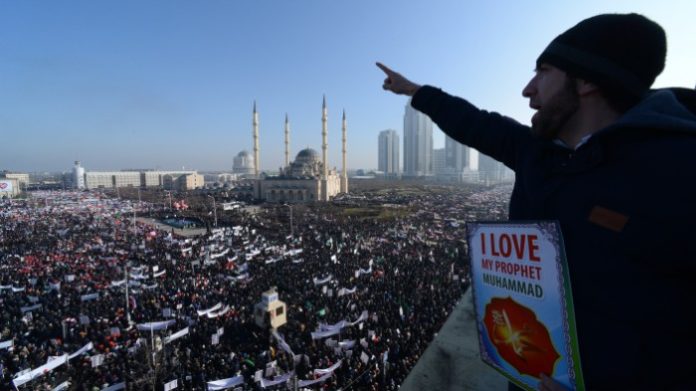 Hundreds of thousands of residents of Chechnya and other Russian Caucasus republics flooded the streets of Chechen capital of Grozny in a government-backed rally against the ‘immorality’ of Charlie Hebdo’s cartoonists that published offensive caricatures of Prophet Muhammad. The protesters, marching and singing near the Heart of Chechnya mosque, were carrying red balloons, placards, and banners, most of them read: “I *heart* Prophet Muhammad”, “We’re against caricatures”, “Hands off the Prophet Muhammad”, “We love Prophet Mohammed”, “No to Mohammed cartoons”, and “Islam is a religion of peace and creation”.

The anti–Je suis Charlie protest was called by Chechen President Ramzan Kadyrov who called Hebdo’s supporters his personal enemies. “We won’t allow the name of the prophet to be insulted with impunity. You and I see how European journalists and politicians crassly insult the feelings of believers. What freedom of speech are they talking about? Russia condemned America and Europe’s terror against Syria and Iraq, as well as the war-mongering in Ukraine, and Western countries and the United States adopted sanctions against Russia,” Kadyrov told the crowd.

Habib Ali al-Jifri, a Yemeni Muslim scholar reputed to be directly descended from Muhammad, gave a lengthy, rousing speech at the rally, drawing cries of “God is great” and bringing Kadyrov to tears of sorrow and rage. Bishop of Makhachkala and Grozny Varlaam attended the protest to condemn the West for “trying to sow discord between our religions”.

Fiery Arabic cleric at Chechnya protest against #CharlieHebdo cartoonists bringing many to tears, including Kadyrov pic.twitter.com/t3wnJGQPiW

Sergey Lavrov, Russia’s Foreign Minister, was the country’s representative at the March of Unity in Paris. However, back home, the state doesn’t encourage printing cartoons of the Prophet. “The publication in Russian media of such cartoons goes against moral and ethical norms worked out over centuries. Publicizing cartoons on religious themes in the media can be considered abusive or degrading to the representatives of religious confessions and groups, and fit as inciting traditional and religious hatred, an offence under Russian law,” Russian media regulator Roskomnadzor warned on January 16. In October, Russian President Vladimir Putin blamed the US for many current global problems, including unrest in Ukraine and Islamic terrorism. “Unilateral dictatorship and obtrusion of the patterns leads to opposite result: Instead of conflicts settlement – their escalation. Instead of sovereign, stable states – growing chaos. Instead of democracy – support for very dubious people, such as neo-Nazis and Islamic extremists,” he said.

The pro-Kremlin Kadyrov at the same time called the Islamic State a CIA project. “Baghdadi should take off his mask and declare loudly and clearly that he is a CIA agent, that he has been recruited. They (the Islamic State) are Shaitans (devils) and their sole obsession is to grab as much money as they can lay hands on. They are acting on orders from the West and deliberately exterminating Muslims,” he said.

Komsomolskaya Pravda, one of Russia’s most popular newspapers, carried the headline “Did the Americans organize the terrorist attack in Paris?” on January 12.

Chechnya, where the Kremlin crushed a nationalist and Islamist rebellion during two bloody wars in the 1990s and 2000s, has recently faced a new flare-up of insurgent violence when a suicide bomber killed 5 police officers in October and gunmen killed 14 police officers in December in Grozny. In response to the December attack, whose perpetrators said they were avenging the alleged assault of women by Kadyrov’s security forces, the Chechen President called for the punishment of the attackers’ relatives. Houses of suspected militants’ families were set afire by masked men. Sergei Markedonov, an associate professor at the Russian State University, interpreted the protest against Charlie Hebdo as yet another attempt by Kadyrov to position himself as a politician of national standing and as a spiritual leader of Russia’s estimated 16 million Muslims.

“He wants to break out of the boundaries of Chechnya and become leader of Russia’s Muslims. Plus, if he is a leader of national significance he will be able to win more concessions [from Moscow]. An expert can say that on the one hand he’s fighting Islamists while on the other hand he’s supporting them, but here there is no logic, politicians don’t operate by that logic,” Markedonov told VICE News.