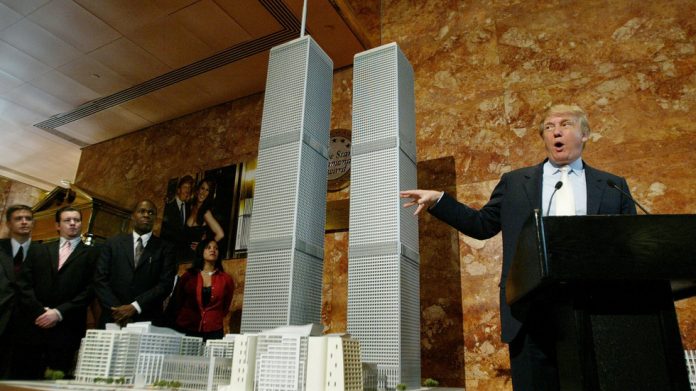 The president of the United States of America says he knows who was behind the al-Qaeda terror attacks on the US in September 2001 and added that “Iraq did not knock down the World Trade Centre”.

“It was not Iraq,” Trump told ABC News. “It were other people. And I think I know who the other people were. And you might also.”

Almost 3,000 people died when 19 terrorists, most of them Saudis, hijacked four passenger planes on September 11th 2001. Two of the planes were crashed into the Twin Towers in New York City, one into the Pentagon in Virginia and one was brought down in Pennsylvania after passengers fought back.

It is not clear who Trump was talking about, but Saudi-born militant Osama bin Laden and his Al-Qaeda terrorist network are widely considered to be the culprits behind the attacks – even though bin Laden himself denied all involvement on several occasions before his death in 2011.

The Bush administration cited the 9/11 attacks to invade Iraq in March 2003, claiming the country had weapons of mass destruction it could give to terrorists.

President Trump went on to criticize American involvement in the Middle East, which he called ”the worst decision made in the history of our country” that has cost the US trillions of dollars.

On September 11, 2001, hijackers commandeered commercial airliners and flew them into the World Trade Center towers in New York City and the Pentagon. The fourth jet, said to have been aimed at either the White House or the Capitol, crashed in a field in Pennsylvania.

John Kerry Admits: “WTC 7 on 9/11 was Brought Down in a Controlled Fashion”
Get Your Anonymous T-Shirt / Sweatshirt / Hoodie / Tanktop, Smartphone or Tablet Cover or Mug In Our Spreadshirt Shop! Click Here
Loading...