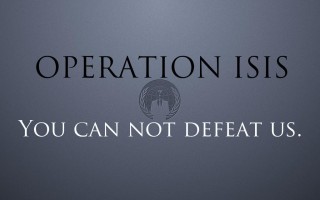 A member of Binarysec was interviewed the other day and expressed a message that I think sums up how many of us feel in regards to OpISIS and the collective effort put in. You can watch the video here: http://www.techworm.net/2015/12/anonymous-reveal-how-they-take-down-isis-video.html

*You have probably heard in the news recently about Anonymous battle with OpISIS, but for those of you who have not been around long enough or have not been paying attention, here is a chronology of events.*

June 2014 – The Origins of Anonymous OpISIS comes from the summer of 2014 when ISIS hacked into an Anonymous affiliated Twitter account and posted bloody/gory imagery. As a result Anonymous promised retaliation:


2/19/2015 – Anonymous announces that it has successfully taken over dozens of previously owned Islamic State Facebook accounts and exposed the identities of thousands of ISIS twitter accounts: https://anonhq.com/opisis-round-2-anonymous-hacks-thousands-of-isis-accounts/

2/25/2015 – As a result of the previous weeks shutdown of ISIS web sites Anonymous gains the attention of the United States government who had been “monitoring” the web sites Anonymous had taken offline: https://anonhq.com/opisis-round-4-anonymous-beats-united-states-in-combating-terrorism/

4/13/2015 – A group known as Ghostsec begins to organize and take effect. In coordination with Anonymous they announced new plans to wipe ISIS completely off the internet: https://ghostbin.com/paste/ce5jz

4/19/2015 – Ghostsec is fully organized and launches a new website where anyone can report any report ISIS related Twitter, Facebook, internet accounts. In doing so OpISIS is opened to the general public for the first time: http://pastebin.com/UWWyaPRX

11/13/2015 –  Anonymous and Ghostsec’s partnership ran smoothly and successfully, people from the public were reporting what they say and the hackers worked efficiently behind the scenes removing the material. The day of the Paris attacks a strange occurrence happened as an Anonymous affiliated website was taken offline just hours before the Paris took place: https://anonhq.com/facebook-bans-anonymous-hacktivists-behind-opisis-just-hours-before-the-paris-attack/

11/19/2015 – In response to the terror attacks Anonymous announces that it had taken 5,500 Islamic State Twitter accounts offline: https://anonhq.com/anonymous-vs-isis-anon-takes-5500-isis-accounts/

11/23/2015 – Intelligence analysts reach out to Anonymous explaining to people to record any data from IS web sites that implicate/identify the owner(s) before taking offline. Intelligence analysts point out that the fact that ISIS is heavily involved on apps such as Telegram and hint people to begin searching here as a next step in uncovering ISIS identities: https://anonhq.com/how-you-the-average-person-can-contribute-to-the-war-on-isis/

11/29/2015 – A group of Anonymous on 4chan begin to organize and formulate and international ISIS trolling day and release their proposal: https://ghostbin.com/paste/ucsf3

12/05/2015 – By this time the news of December 11th OpISIS troll day has become viral and multiple news agencies around the world have begun to publish about this. A new modified version of the movement is released: https://ghostbin.com/paste/qttb5

12/11/2015 – OpISIS troll day was a great success. A chat room was set up and everyone had some laughs: https://anonhq.com/december-11th-international-islamic-state-troll-day-operational/

12/17-2015 – News was passed along to the AIA that the caliphate cyber army has actively begun to switch channels on Telegram, suggesting that the Islamic State still has a large presence on this particular service. Intelligence also suggests that the Islamic State may also be utilizing applications such as WhatsApp and Viber, as both of these services have been banned in surrounding countries such as Egypt for “national security concerns”.

OpISIS is not over and we still have a lot of work to do. Continue to stay tuned for all of the latest developments. Remember that as a result of Anonymous’ actions against them the Islamic State has moved primarily off of Twitter and moved to other services. As OpISIS progresses people need to widen their vision to stay ahead of the game. If you have the capability exposing the IP address, or phone number or contact information of ISIS members this should take priority over shutting down the individual site.

This article “OpISIS: A chronolgy” is free and open source. You have permission to republish the article using a creative commons license with attribution to the author and AnonHQ. Join the conversations at www.anonboards.com