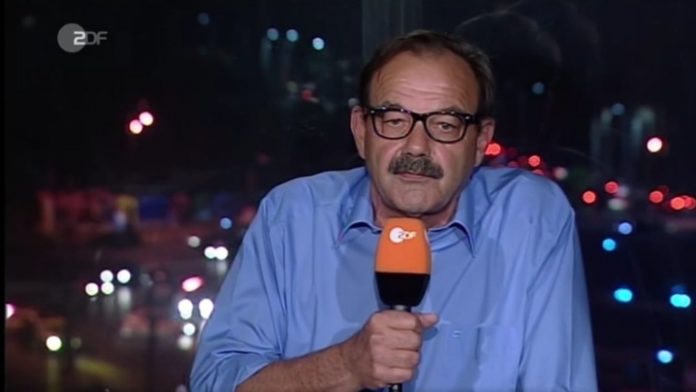 A senior correspondent for German state media broadcast ZDF heute stunned his European audience during a report from on the ground in Syria when he gave a straightforward and honest account of his findings while investigating what happened in Douma. The veteran reporter, Uli Gack, interviewed multiple eyewitnesses of the April 7 alleged chemical attack and concluded of the testimonials, “the Douma chemical attack is most likely staged, a great many people here seem very convinced.”

It appears that all local Syrians encountered by the German public broadcast reporter were immediately dismissive of the widespread allegation that the Syrian government gassed civilians, which the US, UK, France, and Israel used a pretext for launching missile strikes on Damascus.

ZDF heute: The world continues to puzzle over whether the banned chemical weapons were used in Douma. ZDF correspondent Uli Gack is in Syria for us: “you were in a large refugee camp today and talked to a lot of people – what did you hear about the attack there?” Gack responded, “the Douma chemical attack is most likely staged, a great many people here seem very convinced.”

The German ZDF report is consistent with veteran British journalist Robert Fisk’s investigation upon being the first Western journalist to gain access to the site in Douma. Fisk reported early this week, “There are the many people I talked to amid the ruins of the town who said they had ‘never believed in’ gas stories–which were usually put about, they claimed, by the armed Islamist groups.”

ZDF (Zweites Deutsches Fernsehen) is one of Germany’s largest and oldest state-owned channels, which is funded in part through citizens paying a household licensing fee, and Heute is perhaps the most visible public news program in all of Germany.

According to the live report, some witnesses told ZDF that Islamist rebels killed victims with chlorine, filmed the scenes, then claimed an ‘Assad chemical attack’. Though interviewing “a great many people [who] seem convinced” that a chemical attack did not actually happen, the reporter did not attempt to censor what he consistently heard from locals who were said to be in the area when the events occurred.

Increasingly, it appears that mainstream media gate-keepers are losing it over the fact that so many highly visible and respected reporters and broadcasters have featured reports this week which publicly question the Syrian chemical attack narrative and US coalition missile strikes that followed.

One writer for the Guardian and Daily Beast who is a well-known pro regime-change advocate, for example, laments that “disinformation has taken hold” on Syria. In a series of tweets following Robert Fisk’s bombshell report for the Independent, Emma Beals, who often simply parrots whatever her ‘rebel’ sources tell her reacted to the recent profusion of high profile pundits questioning the established narrative on major British platforms.

My educated and informed friends are emailing me en masse asking me about what’s going on in Syria because “it’s so hard to work out the truth.” Having spent years busting a gut to dig it out, it’s heartbreaking to see the extent to which disinformation has taken hold.

My educated and informed friends are emailing me en masse asking me about what's going on in Syria because "it's so hard to work out the truth." Having spent years busting a gut to dig it out, it's heartbreaking to see the extent to which disinformation has taken hold.

Beals advocates what we recently described as the highly simplistic “Disney version” of events in Syria:

Once upon a time, a country called Syria was ruled by a ruthless dictator named Bashar Al-Assad. He was a cruel man who gassed his own people. His actions caused a civil war in Syria. America and Europe tried their best to stop the devastating civil war, and even generously accepted many Syrian refugees. Eventually America went to Syria, defeated ISIS, and is now trying to restore stability.

This above version is quite popular among many Americans and Europeans and the Western mainstream media.

Meanwhile, almost simultaneous to German TV’s ZDF heute report from Syria, lawyers of the Bundestag (German federal parliament) issued a legal brief on the US-led strike on Syria. The government lawyers’ report was requested by the left-wing party Die Linke in response to the US coalition missile strikes which primarily targeted facilities in and around Damascus.

“The deployment of military force against a state to punish it for breaking an international convention is a violation of the international law prohibiting violence,” reads the report, as cited by the German Press agency DPA and translated by Sputnik.

The legal report further concluded that the US-led attack on Syria – which skirted the UN – but which was supported by the German government (though without German military participation) was based in chemical attack claims that the legal team deemed “not convincing”.