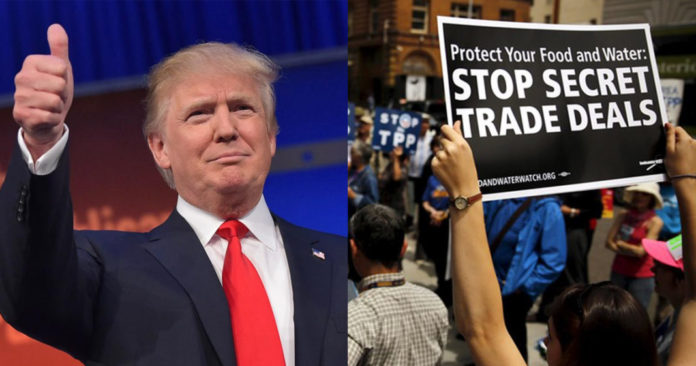 If Donald Trump continues signing executive orders in a fashion mirroring his first week in office, he will out do Obama and Clinton and Bush Jr. Not only are the executive orders – which should be a method of last resort – being signed, the orders given are large ones.

In one of the biggest moves to date, Trump has unapologetically removed the United States from the Trans-Pacific Partnership.  He has followed through with his campaign promise, overturning the TPP agreement.

This isn’t necessarily a bad thing, either. The TPP, along with its TTIP cousin was shrouded in secret deals that only corporate giants sighted behind closed doors. Even members of Congress didn’t get a look in, and WikiLeaks’ Assange decried the deals as poison to international trade, and most certainly not for the common worker.

By executive order, Trump has not only overturned the American participation in this trade deal, but has flipped international partnerships onto their proverbial backsides. Australia is flip flopping about, and Japan is shaking its head. Without the United States, there is no TPP.

Bernie Sanders and Elizabeth Warren even support this particular order.

“Great thing for the American worker, what we just did,” Trump said as he signed the order in his new Oval Office. And great it perhaps is, forcing other countries to move away from American dependence and to stand on their own merits.

The TPP was never the cloud with the silver lining. A lot of people were on edge. One of the biggest and most damaging clauses, as Julian Assange warned us of, was the settlement clause that provided corporations a worrying ease to sue, as they pleased, governments for lost profits. If a tobacco company lost profits because of health warning labels, it would be able to sue the government. If ecological restrictions prevented Exxon from drilling for oil, the company had the right to sue for lost profits, and so forth.

READ MORE HERE: No TPP: Over 200,000 Farmers Fight Back Against Congress “I am glad the Trans-Pacific Partnership is dead and gone,” he said. “For the last 30 years, we have had a series of trade deals – including the North American Free Trade Agreement, permanent normal trade relations with China and others – which have cost us millions of decent-paying jobs and caused a ‘race to the bottom’ which has lowered wages for American workers. Now is the time to develop a new trade policy that helps working families, not just multinational corporations. If President Trump is serious about a new policy to help American workers, then I would be delighted to work with him.”

Some argue that the TPP was dead in the Pacific waters anyway, never going to vote in Congress. But this executive order ensures its death.

Nations around the Pacific Rim must now wake up to the call. The trade agreement covering 12 countries is no longer.

The initial reasoning behind the trade deal was to contain China and give America an advantage in the Asia Pacific region. Now, without the deal, China will intend to fill the vacuum.

Interestingly, Australia has now opened the doors to Beijing to take America’s place in the deal, essentially thumbing its nose to old economic alliances. Prime Minister Turnbull’s suggestion to include China, however, shows an ignorance on the Prime Minister’s behalf, unless intended to “contain” America instead.

Without America in the TPP, the deal is dead, but the next economic chapter in the Asia Pacific will open with a cliff hanger.

Trump’s departure from the TPP also concerns Australia in a strategic context.  Rex Tillerson, Trump’s nominee for secretary of state, has openly disputed the Chinese claim in the South China Sea.

“We’re going to have to send China a clear signal that, first the island building stops, and second, your access to those islands is also not going to be allowed,” Tillerson said.

Last year, local Chinese papers made it very clear that any US intervention leading to the prevention of China accessing the islands would mean war.

If this eventuates, Australia will be left in a very difficult position of choosing China over the United States.

Dr Allan Patience, the principal fellow of the Asia Institute at the University of Melbourne has told News.com.au that Australia should “pull its head in” now. “We should begin to talk very seriously about what the ANZUS treaty means,” he said, further saying Australia should not participate in any way with the US-China sabre rattling.

“Australia has got to wake up to the fact that we are part of the Asia Pacific as never before. Our future, our security and our prosperity is here.

“America may be endangering Australia’s future in those terms.”

This article (Trump Dumps Trans-Pacific Partnership in Latest Executive Order) is a free and open source. You have permission to republish this article under a Creative Commons license with attribution to the author AnonWatcher and AnonHQ.com.